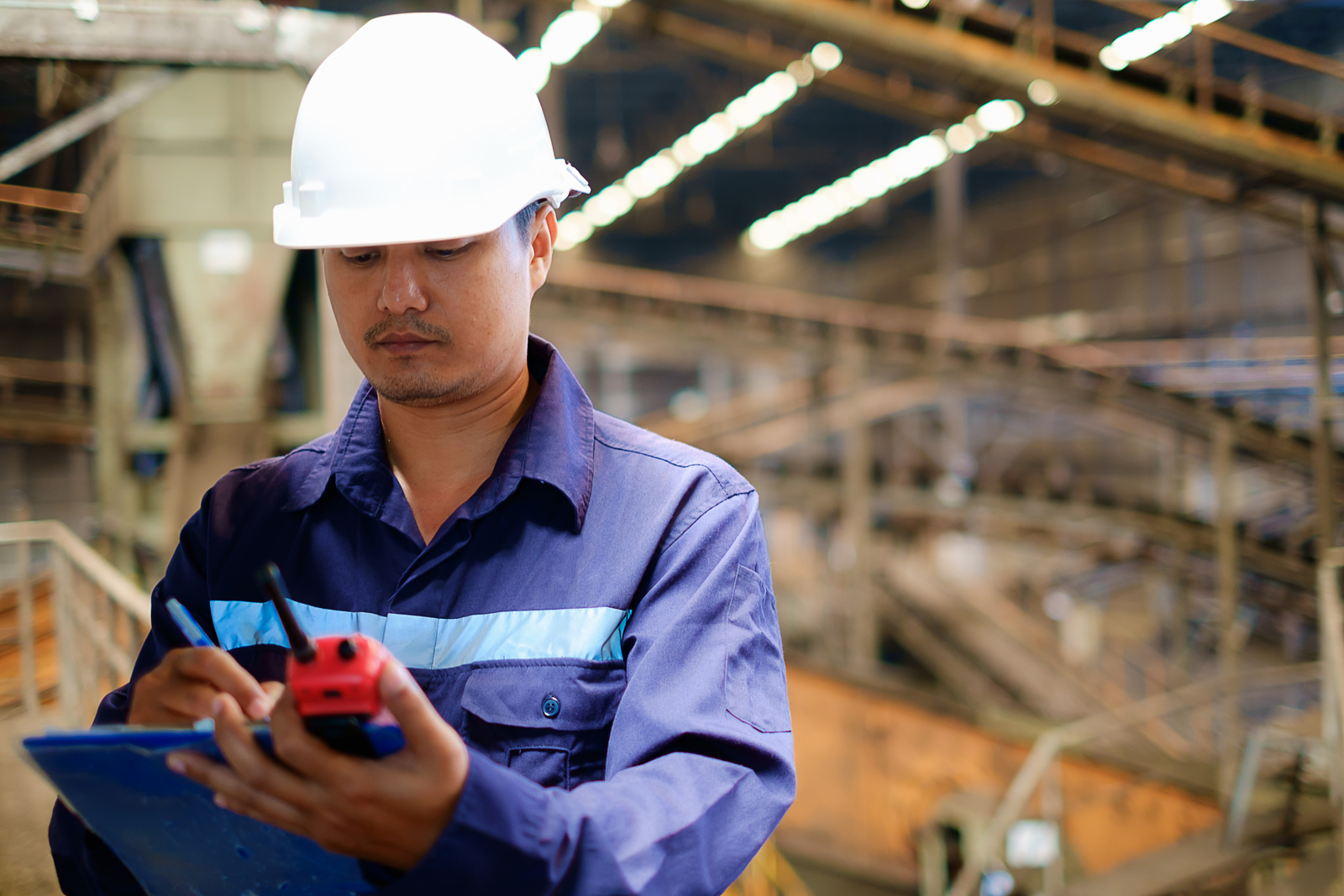 There's nothing worse than a stuffy industrial facility. It can cause poor air quality and uncomfortable employees or customers. What's even worse is the high bills you get when you have an inefficient HVAC system. There are many strategies for saving money on building costs, and increasing airflow volume is a big part of that.

When looking to move air in your industrial space, there are many types of industrial fans to choose from, and it can be very difficult to decide what is best for your space. As the inventor of HVLS Industrial Ceiling fans, also known as the High Volume, Low-Speed fans, MacroAir has continued to be a leader in the market by developing the most innovative large fans in the world. We continually strive to push boundaries and set the bar when it comes to engineering and product development. We've worked across many different industries and have seen all different types of fans. We’ll take you through a list of all the industrial fan options and their pros and cons so that you can get a better idea of what might be the perfect fan for your facility! 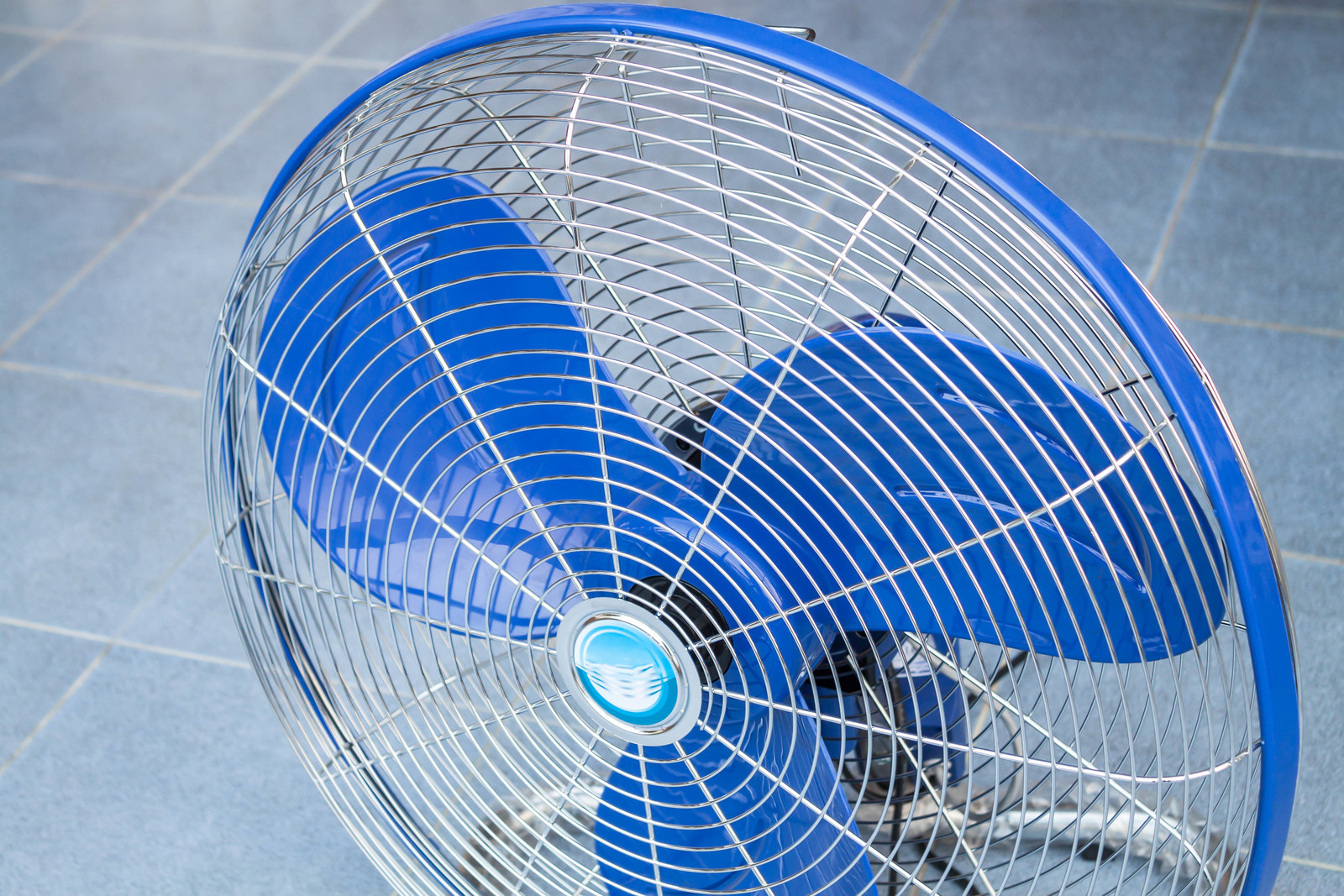 Industrial fans are free-standing fans that can be plugged into an outlet and easily moved around in any direction to direct air to exactly where it is needed. Floor fans are popular because they can move large amounts of air very quickly and are generally pretty inexpensive to purchase and require essentially no installation. A con of floor fans is that they can take up quite a bit of floor space and, due to the high speed, can create a lot of noise, which can be distracting for workers. 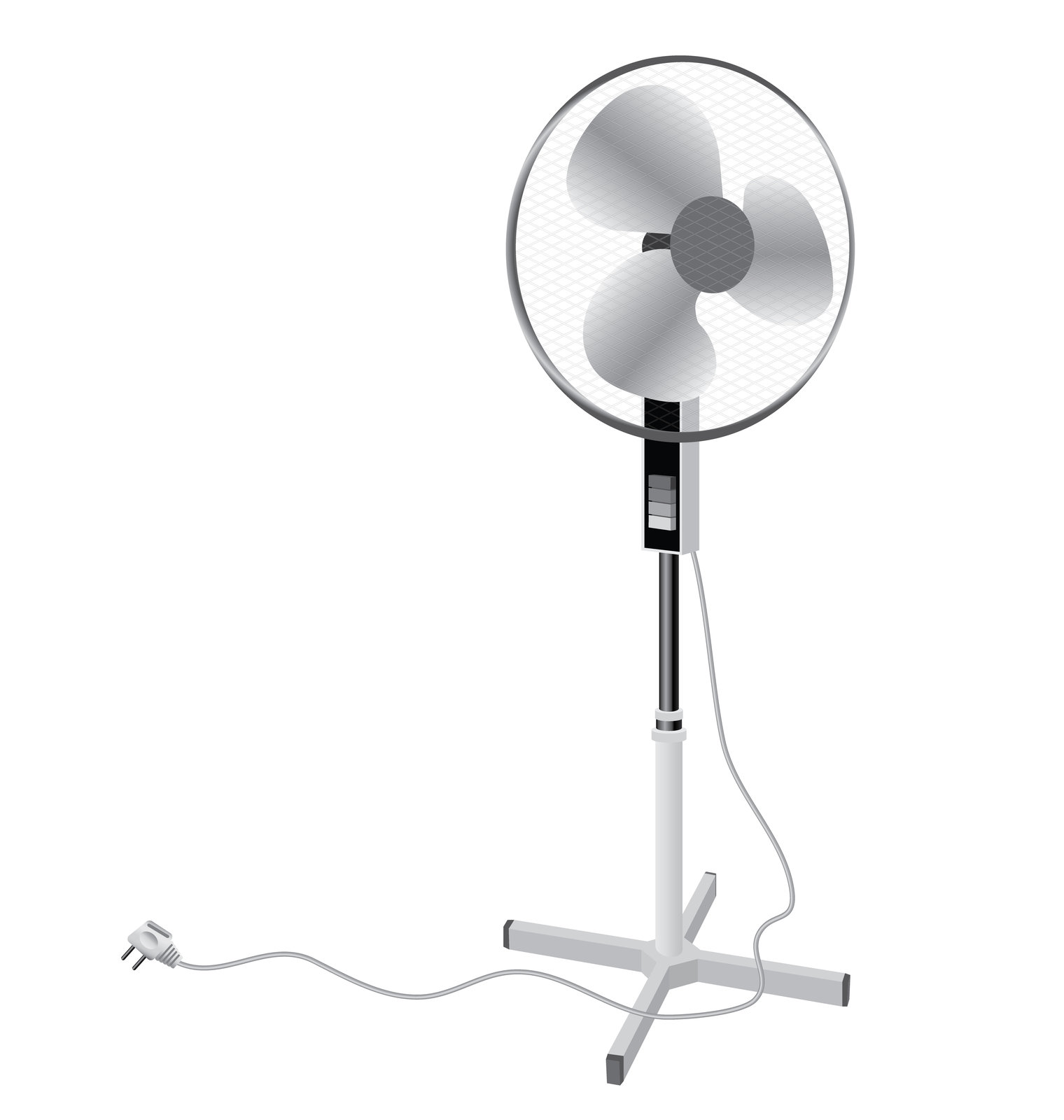 Pedestal fans typically have a large heavy base to keep them sturdy, and their height and direction can be adjusted. Many pedestal fans also have an oscillating feature that can help to further increase airflow and disperse cool air throughout the space. Pedestal fans are available in many different diameters and heights, and their blades move at high speeds to move large volumes of air. Just like industrial floor fans, these fans take up floor space and can get in the way.

Industrial wall mount fans are secured to the wall to conserve ground space, and they move large volumes of air across space. They can be slightly adjusted and directed toward different areas, although not as easy as the floor or pedestal fans.

Industrial drum fans are similar to floor fans in that they are free-standing and usually have a long power cord so that they can be plugged into an outlet and moved around with ease towards the direction they are needed. Drum fans are super powerful and use high-speed, high-volume power to move air in large quantities very quickly, which can be great for spaces that require ventilation. However, drum fans are very loud and can make it very difficult to hear what is going on in your facilities, thus posing a possible safety hazard. Industrial ceiling fans keep fans off the ground to conserve your precious floor space and eliminate the hazard of tripping or running into fans on the ground. Large industrial fans have a powerful motor that generates massive amounts of airflow by using the high volume, low-speed method, meaning they have large blades that move a high volume of air, but at a slower speed than other fan types. Industrial HVLS ceiling fans work by creating air movement from ceiling to floor, which increases circulation, helps to control humidity, and conserves warm air and heat in colder months. In addition, they have been developed to have a very low energy consumption rate.

Generally, the size of the fan is what really determines the price of a fan. Smaller industrial fans will be less expensive, but take up valuable floor space and can be very noisy. If these are important to you, then the cost savings may not be worth it vs a large industrial ceiling fan.

The cost of a large ceiling fan at retail price is generally somewhere between $3,000 – $9,000. An 8-foot industrial ceiling fan will be on the low end of the price spectrum, while a 24-foot industrial ceiling fan will be on the higher end of the price spectrum. In addition, the price can vary quite drastically depending on the manufacturer, model, and features that are included with the purchase. Typically, a complete industrial ceiling fan purchase includes a motor unit, blades, motor control panel, motor control cable, remote cable, and remote. As for the actual electricity cost of running your fan, it can vary widely depending on how often you run it and how large the blades and motor are. It is important to keep in mind that these costs usually don’t cover shipping and labor costs of installation, which can add up to an extra few hundred dollars, depending on where you are located. One of the many benefits of using an HVLS fan in your industrial space is the incredibly small amount of noise that it produces (or rather doesn’t produce) compared to other industrial fans. Industrial fans are made to cool and disperse air and often require many noisy parts and a loud motor to do so. On the other hand, HVLS industrial fans are built to improve and magnify airflow, which in turn creates a cooling effect throughout the rooms in which they operate. MacroAir takes preventing noise in the workplace very seriously, which is why our industrial HVLS fans are designed with specific parts that are chosen because they are as quiet as possible. Our AirVolution-D, for example, was created with a gearless design that actually eliminates any noise from friction between gears.

Industrial ceiling fans in particular are great to use simultaneously with any HVAC system. This is because the HVLS fan will increase airflow and amplify the cooling or heating effect of the HVAC. When these fans are installed, they are designed with HVAC in mind and, therefore, are placed in areas to increase efficiency. Generally, heating and cooling systems don’t do much in terms of distributing air, but rather just push hot or cold air into space. This is why HVLS fans can be extremely efficient when paired with HVAC, and they can even lower your energy costs. MacroAir industrial fans are made to function in two specific ways to work together with your HVAC system. During the summer months, HVLS ceiling fans can be operated in the counterclockwise direction in order to push air downward creating a cool breeze. On the other hand, during the colder winter months, the direction of the fan can be switched to rotate clockwise in order to push warm air from your heating system downward which naturally rises to the ceiling and recirculates it to provide a warm draft.

Case study: One Fan vs Many Fans

Many business owners have opted to install industrial ceiling fans in their facilities and have seen great success in increasing their airflow and cooling down employees and patrons. Cycling coach, Rachael Wilson, decided to open her own cycling studio called Bikecoach and had planned to install many small oscillating fans to keep riders cool during their workout. However, a friend of hers suggested that, instead, she install one large fan overhead. So, Rachael set out to find the perfect option. After doing lengthy research, she found that no other brand had the sleek and stylish options that even closely compared to those of MacroAir. One 12-foot MacroAir AirVolution-D 550 fan was installed, and immediately Rachael stopped using air conditioning and saw incredible savings on her energy bills.

“We haven’t turned the air conditioning on a single time since the fan went in. My bills were astronomical. It was the heat of summer, and we were doing a lot of in-and-out during construction. But even when we shut the doors, the heat was coming through, and we had to run the air conditioner. The bills were scary – they were half-again as much as the rent. The fan went in, we turned off the A/C, and the first bill was half. I think the fan will pay for itself quickly.”

She also really appreciated that the fan’s breeze simulates an outdoor experience, which is wonderful for cyclists. Learn more about how a large ceiling fan can help cool your gym or other space.

When trying to find the best way to cool down an industrial-sized space you might wonder if you should choose to go with one large industrial fan versus using multiple small industrial fans to get the job done. Well, we have the answer for you. Because of the larger circumference and the specially designed airfoils of our large industrial ceiling fans, it only takes one MacroAir fan to create balanced and comfortable airflow in a large area, compared to 34 smaller industrial fans to get similar results. So, in the case of cooling your industrial space, bigger fans really are better.

We hope that with all of this information about different industrial fans you can find the perfect fit for your space and needs. There are so many options to choose from with their own pros and cons, so you are bound to find the fan for you! At MacroAir we have a passion for innovation and a dedication to energy efficiency, and we would love to find a solution for you. If you want to find more information or chat about our cooling options, make sure to find us on our contact page.

Do You Know the History of Big Fans?

Take a look at MacroAir’s history and the history of big fans. It goes back more than 50 years and will keep making history for many, many more. 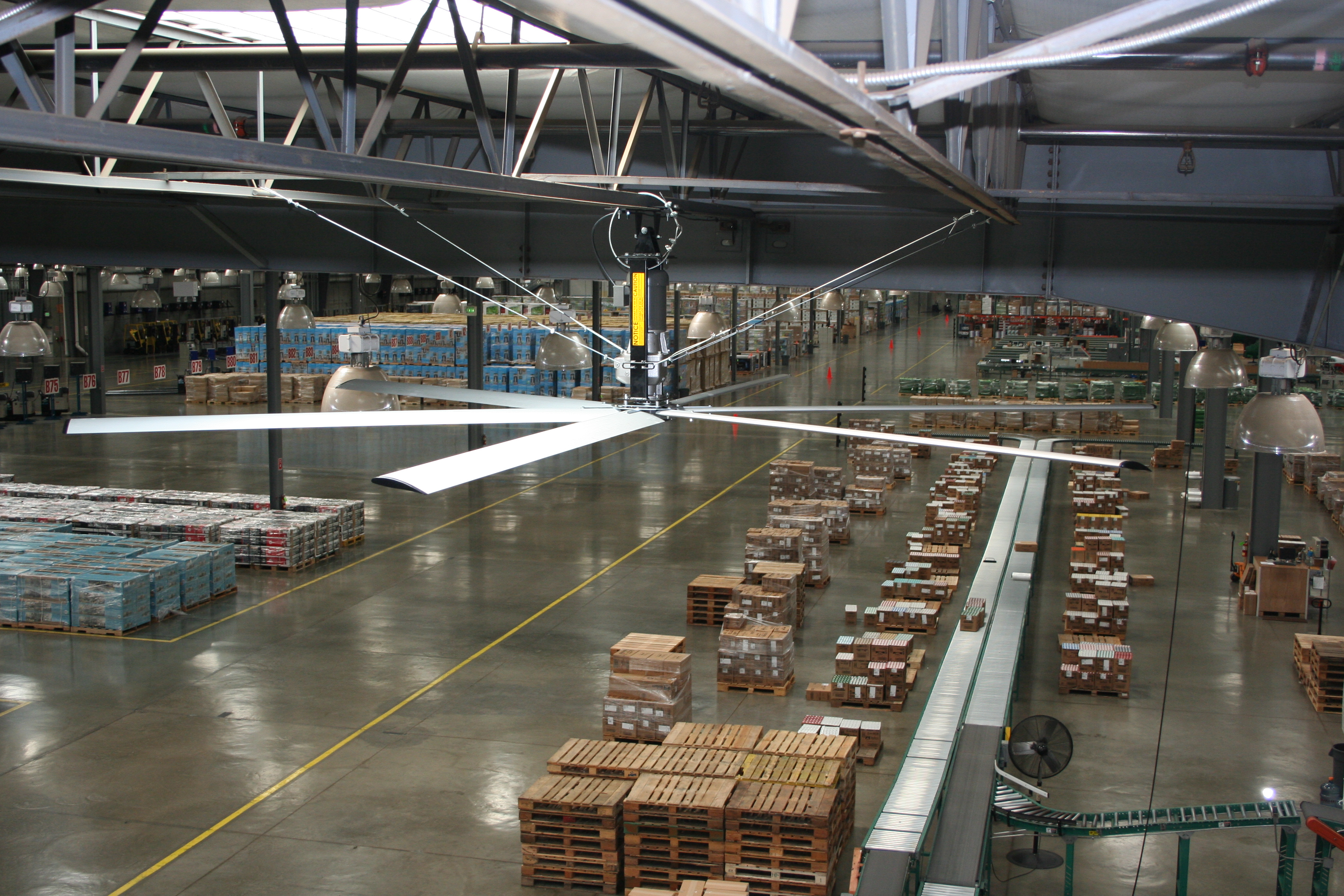 Be Aware of These 6 Industrial Fan Safety Hazards

In a warehouse or distribution center, employee safety is always the first concern especially when working with industrial equipment. Industrial fans are no exception....